The updated wrap-around cover for Sorrow in Haven (Revised Edition) 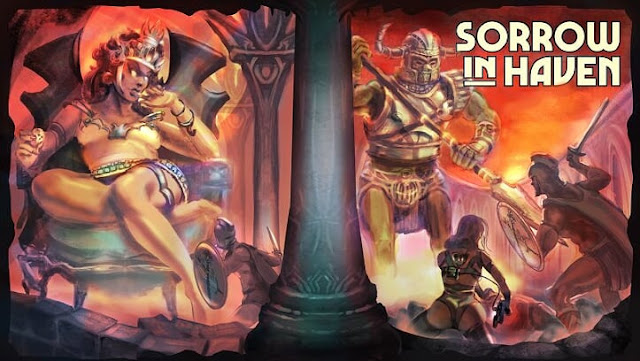 I expect the new draft will be ready for player-driven testing and proofing (those folks are BRUTAL) by the end of May, which  is behind schedule, but we can't sit down anyway so I'm not worried abotu it :)

Property Rules
Haven is a packed, overcrowded place, but PCs can get their hands on property. The monthly cost to rest is based on the location (social class) and size of property (based on a tiered scale). Size is abstracted into "units" of 10' x 10' spaces. For property larger than 15 units in size, the price of additional units increases, and the price increases again at 26 or more.


Each Unit is a dedicated space. Some examples:

To outright purchase a property is the monthly cost x 100 (for low class), 150 (middle class), or 200 (for upper class). Then on top of that are monthly maintenance fees of 10% of the original monthly cost.

For those 3 properties mentioned above:

Side Note: 33% of a character's monthly Lifestyle cost can be applied directly to property expenses.

So ... why do this?
It seems like some fiddly nonsense. However, more than one player over the years has started a money-making scheme, needed a base of operations, or any manner of thing where some rules for property became important. They aren't necessary and have little bearing on reality (but do work out nicely with the lifestyle costs.

Lets say you've got a crew of 3 adventurers who are "working class" lifestyle. That totals to 75g/month, of which 25 is considered to be applied to property. They could rent, for "free" any property that costs 25g or less each month. An 8-unit lower class property (definitely a bar with rooms), a 4-unit middle class place (an apartment with some storage space), or 1-unit upper class joint (a cramped barracks).

Fine. But WTF does that have to do with the Cover Art?
Nothing. But this does...

Escian Queen's Gimp Threat 6 - Large Neutral Filth (Human Intelligence); Demeanor: Hateful; Ferocity: UnrelentingEncounter 1 wandering, 1d3 stocked; (never in lair)
Description: Escian giant-kin that have been bound to serve their Queen without question. They love her and hate everything else. Their armor is permanent and welded shut. Their massive spears cause opponents to stagger (each 4 rolled for damage is instead 1 damage but the target is stunned for 1d6 segemnts).

Escian QueenThreat 12 - Giant Evil Fey (Brilliant Intelligence); Demeanor: Manipulative; Ferocity: Dangerous
Encounter never wandering, 1 stocked; (always in lair) Description: the giant witch-queens have the powers and advances of a 6th level wizard including 4 cynosure. They are incredibly rare to encounter, but their influence is likely felt by folk long before they know what is happening. They are outcasts of the Autumn Court and wish to gain power to destroy the Autumn Court. 4 Queens are known to still be living, and another 3 rumored to still hold sway. The Queens Yrio and Hesphetia are dead, but the other Queens still speak of them as though they are still in power.They rarely leave their throne rooms, but when they do they move without making a noise or leaving a trail. If forced into physical combat, a critical or legendary strike with their fist does an additional 1d10 damage.

Posted by Dale at 4:22 PM No comments: Links to this post

Going for that old school pulp scifi / fantasy vibe ... The revised edition is on the way!

Posted by Dale at 5:30 PM No comments: Links to this post

Art for Sorrow in Haven

The editing is in full swing and the new illustrations are almost done. Here are a few for you to enjoy!

As editing progresses in Sorrow in Haven, I've been running a campaign with multiple parties in Castle Gargantua. I modded up Basic D&D (I'm calling the system BXDH) with a simple "Aim for 20" resolution system.

Aim for 20 in a Nutshell

I've kept it simple on purpose - originally for faster play at the table and now online. It works, but there are some questions about task difficulty. So ... some options ...

Advantage and Disadvantage
This works by changing the distribution of the d20 roll. Disadvantage is usually handed out when folks are in trouble (you are crippled by poison!) or do describe something amazing (handed out as a reward). It works, but is purely mechanical.

More Interesting Option: Change the Stakes
Changing the stakes of failure definitely changes things.  For example, climbing that 30' cliff could have 3 difficulties based on failure:

Getting a Critical Failure (Natural 1) increases the failure results


Another Option: Succeed with a Cost
I really liked this option in Dungeon World and use it sometimes. Using it all the time doesn't feel right because sometimes things just don't work. A roll fails, but I'll give the player an option to succeed for a cost. Some examples:

Posted by Dale at 7:21 AM No comments: Links to this post

I like the idea of gear breaking down - it makes choosing the right equipment important, adds another layer of resource management, and allows for some minor boons and improvements to gear. But tracking gear hit points sucks. Having items be in perfect condition or broken is boring.

I tried a durability system with descending die types, but that just didn't hit the spot - gear was too durable to the point where it wasn't even interesting to track - it became pointless book keeping.

So ... the Durability Die Rules for Sorrow in Haven v2:

The die an specific item also determine when a roll is made. If an item is encountering normal wear and tear or use then no roll is needed. Like a prybar being used to pry open a chest - no roll required. But if a 10' pole is used to brace across a hole and a bunch of people hang from it, you bet there is a durability roll.

Advantage and Disadvantage can be applied to durability rolls as well, but if it has Advantage why even roll?

Artwork for Sorrow in Haven is still filtering in, and looking grand. I'm running some old school D&D and have a Mothership game in the works while I'm preparing for some hard editing. Also, some of my group are running their own games for a while, which is pretty sweet. In the mean time, here are some shitty magic rings I just thought of.

Not using Sorrow in Haven - no problem. some OSR conversions:

Posted by Dale at 10:17 PM No comments: Links to this post

taking a break from Sorrow in Haven for a bit. the new artwork is coming in (Scott Lemien) , which is fantastic, but I just can't start the editing process - need to spend some time looking at other things. So right now one of my players is running a 5e game for the group, but that is set to finish up shortly. Another is going to run a KULT game when he is back from a trip to Vietnam. In between, though, I I've prepped for a game of Castle Gargantua!

The Game System
I wrote up rules that I'm calling BXHD. They are basically BE(CMI) D&D with an adaptation of the Target 20 system. Human characters only - which means cleric, fighter, mage (I've always hated "magic-user"), & thief. Then to add some spice, I'm using a variation on the Random Character Advancement to allow for characters to have a bit of elf blood or be more barbarian than fighter. I'm 100% OK with a thief taking a ranger roll or a cleric picking up something from the barbarian table. Should be fun :)

I'm also a sucker and had to add in OVERCASTING. Mage and Cleric can cast a spell beyond their "safe" limit (spell slots), but failure has consequences. Magical Chaos in the case of the Mage, Atonement requirements in the case of Clerics.

... and the LUCK stat. CC is 3d6 in order ... then roll for Luck and you can swap it with another score. There might be a LUK check sometimes, but mostly characters can burn the score and get a +1d6 on their d20 rolls. Characters with a positive LUK modifier are "lucky" and those without are "unlucky" - that will start showing up immediately when random targets are assigned and whatnot.

The Castle
I took the random generators in the book and created some Tablesmith tables, then generated the whole damn castle, each region having 1d4+4 rooms. 20% of the rooms have descriptions pulled from my random dungeon generator instead of those in the book to add some spice, and i added a few other bits including a few restock rolls to make things faster later.  Generated rooms look like this:


I wanted to include the option for classic D&D monsters too, so 50% of wandering monsters are the patrols from the book, which are awesome, and 50% are random D&D critters (basic and expert only). The D&D creates are generated with NO REGARD for character level because that is just more fun. They don't have to fight them - they just encounter them, maybe in the middle of something else. Sample from the generator:


They list Thac0, but only because I couldn't be bothered to remove it from the generator as it was written ages ago. Same with the treasure - that isn't happening.


I'm super stoked to run this properly ... dipped my toes in a year or tow ago with a single session, but this is full prep madness. If anyone is interested in the tablesmith tables, let me know; i can set you up with everything.