My players were lamenting their lack of funds in the most recent game - they are adventurers, members of the Guild of Defenestration, and their "job" is to get into the dungeons that bloom under Haven. Their "payment" comes from loot they recover (a small percentage skimmed from the top by the Guild for operating expenses, of course).

One of my players was asking "can't we do something to earn a few groats?" My immediate response was "no - you are adventurers! go adventure!" I should have said "sure, but it takes time and has consequences.  After all, if you saw your local mayor working at the local fast food chain, you'd have a thought or two on the subject.

So, some rules for "other jobs" for adventurers. Incidentally, they all suck.

Odd Jobs Rules
A character may stop adventuring for a week and do some fairly boring jobs. This has two consequences.

The First Consequence
If there are any "live" dungeons, roll 1d6.


The Second Consequence
Adventurers have a special place in society. While they are often looked down upon they have a strange respect from the population. Doing non-adventuring things lessens their standing. Reduce the character's lifestyle by 1 level automatically (even if the character spent loot in advance to boost their standing).  A destitute character doesn't get any lower.

How Many Groats?
Sorrow in Haven, and most fantasy adventure games for that matter are not about doing mundane things, they are about taking chances and high adventure; about encountering the weird and overcoming overwhelming odds; and most of all about having fun!
Posted by Dale at 9:52 AM No comments: 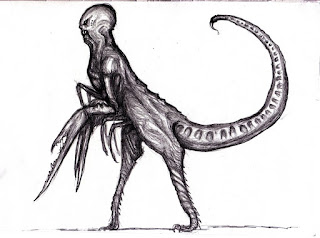 The Gilgesh are an ancient culture, long forgotten from the World of Light. They are casually referred to as scorpion-men.

Most gilgesh are encountered when they are in the middle of a summoning. So far no adventurers have identified what they are attempting to summon because they don't wait around - combat or escape are the number one priority.

The gilgesh vomit acid as their primary attack, their vicious looking claws are too delicate for combat. Their tail does not end in a stinger, buth rather can "tulip" open revealing a terrible second mouth. It is from this mouth they call forth the Ancient Oath of Binding.

The Ancient Oath of Binding
Apparently the Gilgesh once enslaved the ancestors of humanity.  If the Oath is spoken, all who hear it must pass a difficulty (+3) WIT action roll or choose Deference of Defense.  One who defers becomes a worker slave, cleaning the gilgesh or doing menial tasks for it. Those who defend will do so with all their power and even sacrifice their life to defend the creature. Characters who failed the first roll get a second after 1d6 turns; if this second one also fails the target is forever enslaved.

Digestive Acids
If a character is hit by the digestive acids, one thing that they are wearing or are carrying openly (weapons, shields, armor, fancy hats, masks, cool rings, whatever) has to immediately make a durability roll to see if it gets seriously damaged.

Also, I totally borrowed this artwork without permission from: https://kingovrats.deviantart.com/art/Scorpion-Man-II-696164278.
Posted by Dale at 10:15 PM No comments: