Types of Monsters
The Dawn of Eradu campaign will have eight sources for monsters, plus hybrids.  As I'm likely going to be using Dungeon World each of these will be tags.  This doesn't cover everything - beasts, humanoids, and human themselves are monsters as well,

Aliens
Inhuman terrors with inexplicable weapons and creatures (which are sometimes one and the same) grown in vats of bubbling filth.  The aliens want to enslave and do so with terror and weird surgery, implanting or infecting those they wish to control.  They can occasionally be reasoned with, but everyone knows from stories passed down by generation that they destroyed the moon.

Patchwork
Things, for no other word properly describes them, from the Patchwork are of Chaos, Nightmares, and Darkness. They want nothing more than to live in the World of Light - to sun their tentacles and air out their insane geometries.  But they are not alive and therefore cannot truly live - as abominations they cause destruction in their wake.  Simply put - Patchwork Things are demons.

Fey
The four courts of the Land of Unreason, engage in their endless Slow War that sometimes leaks into this reality.  Intrigue, surreal landscapes, blood, and the mingling of unreason are signs that the land of Faerie has claimed a bit of Eradu for her own.  The Fey Nobility care little about the World of Reason, but the lesser Fey often interact with the common folk of Eradu with ... mixed results.

Planar
The Aliens are from another dimension similar to this place.  The Land of Unreason and the Patchwork are regions within the aestheral plane that connects the various dimensions of the Prime and other planes of existence.  These other planes are themselves entire universes with other rules and laws. Sometimes creatures and beings from these universes come to visit.

Undead
A blight upon the land, the unliving horde is a problem.  Some are intelligent, but most are mindless or at least not particularly creative. They wish only to snuff out life.

There are things that are born from the Lord Scions - creatures of metal armed with strange and terrible weapons.  There is an intelligence that cannot be denied, but understanding what Lord Scions had in mind is beyond comprehension.  Many creatures of Scions have an aura of sickness around them; scions also has the highest chance for hybridization with other creature forms.

Hybrids
I'm going to use a lot of random creature creation - at least to get things started.  When a creature of a particular type is rolled up, there is a chance the critter is actually a hybrid between two types - check the Hybrid column.  If the critter is a hybrid, roll 1d10 to see what the hybrid is.

For example, there is a 4% chance that an Undead creature is a hybrid.  Assuming we rolled that it is a hybrd then the additional 1d10 roll result of 7 the undead is some sort of planar undead.  What does that mean?  No idea yet.  Maybe some sort of undead modron servitor gone terribly awry and "fixing" the hills in this region (which involves digging a rather complex tunel system?)

I don't know how this is going to turn out, but it should be fun to find out.

I've always liked a bit of history with my settings, but the folks often go on and on and get into insignificant detail. They often ten make a history exceedingly long and focused on dates - the entire fantastic nature of this other world is lost on me. Leaving gaps in the details also allows for easy customization.

The history of Eradu is somewhat known to my players, but it was always suitably vague to the players and characters to never be a point of conflict. This also allows me to massage it for the next campaign.  An alternate Eradu - numerous familiar aspects, but different from the original.  Below are the Ages of Eradu

Antiquity
Age of Precursors - Eradu was created and those that created it thrived
Time of Dreams - The world changed with the great dreaming; heroes were born
Sorcerer Lords - Dark wizards took control of the land and enslaved all for their dark masters
The Uprising - Slaves threw off their shackles and tok back the world

Golden Ages
Tide of Nations - Great nations were born and civilization thrived on peace and trade
Days of Steel - Technology advances, and with it the aims and goals of all sentient kind
Arcane Revival - Magic, lost since antiquity, is rediscovered and begins a new era
Rise of the Technoarchanists - Technology and Magic merge into super science and sorcery

Dark Ages
Alien Arival - the first of the Graijax arrive and awaken ancient fear ... and they destroyed the moon
The Great War - nation turns against nation; war rages across the land and societies collapse
Patchwork Bloom - The Patchwork finds a crack opened by the Great War and blooms in Eradu
Lost Years - Unknown time passes, the world rearranges itself, and the new ways emerge

Now
Dawn - Safe in Haven, adventurers begin to explore the world again
Posted by Dale at 1:19 PM No comments:

The Next Campaign [DoE]

I'm taking a GM break for a while.  The Worldgod Campaign has ended, and I've decided that the Aldsburg Chronicles ran for a good line time and were also awesome but are now over.  Also I think I've over HackMaster.  The GM's book was such a huge (and expensive) disappointment as well as the last few adventures I picked up.  I'd started customixzing this so much that the game was verging on becoming another system, which almost happened until I realized that I was simply mashing together derivative claptrap (thanks, friends, who put up with that).

But oddly without the pressure to run a game I feel like a wellspring of ideas have opened up.  I've been wanting to do some serious science fantasy mash up stuff for a while.  My other games had it, but I want to go whole hog into the post-apocalyptic strangeness.

Some Inspirations
I'm pretty sure I want Dungeon World to be my next system.  Anyone out there have some experiences with it from a player or GM perspective they want to share?

The Dwarves in this next world will definitely be cannibals that wear leather made from the skins of their ancestors.  Their eternal war with the Elf are because those creatures are of the bloodline of the Vampiric Fey who want to make blades from the metal that can be extracted from Dwarf bones. Also Dwarf gain extra fast healign when eating the flesh of an Elf.

There ... that should get things going.  I'll use the DoE tag for these posts ... Dawn of Eradu.

I've always hated the Bard as an adventuring class - it never worked for me within type of fantasy I imagined.  The "Jack of All Trades" might be a fine character for an adventure story, but when there is a party of adventurers, they become lesser and, in short, the asshole with the lute.  They can inspire the party ... ok ... so what?  Instead why don't they just do something useful and make the party better by being awesome?

My long-standing dislike of bards has lead me to create a bard character for a 5e game I'm going to be playing in. I think I still feel the same way about the bard class after making this guy, but I am digging the crazy Planescape background.  Metal/punk bard half-gith slave escpaed from the Gehenna slave pits of Mongoth ... with a little bit of dragon-blood sorcerer thrown in for extra metal.

We shall see if this character changes my bard mind ... likely not, but it may be hellafun to play for a while.
Posted by Dale at 2:18 PM No comments:

My players made a Law & Order / Criminal Minds style "Murder Board" to go over the "case info": 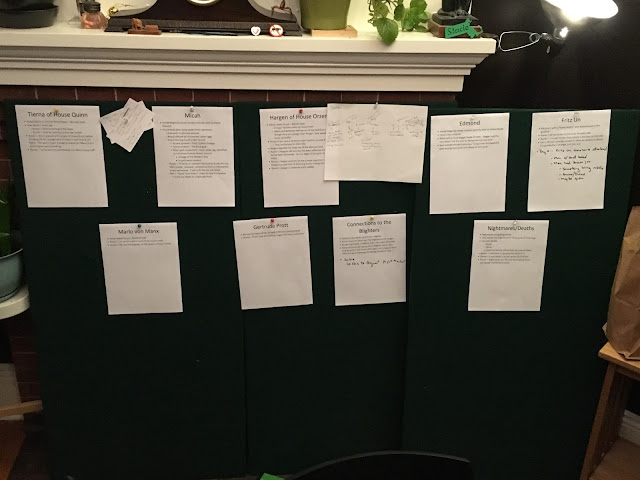 Each of the major players involved has a sheet with details as well as a suspected timeline and general features of the "Nightmare Deaths".  The Note Cards are new info from session 4.

This really was one of my favorite GM moments when the players get excited enough to make props!
Posted by Dale at 12:33 PM No comments:

Nightmares of the Black Goat [ACR-004]

A much better mix than last time ... let's hope this goes well for them!


GM Notes
This was a tough adventure, but I took a new way of writing it up.  Mystery adventures are notoriously crap in RPGs, but using a few clever tricks, I think I nailed it.

1) The plot was actually very simple, but not revealed.  The party was thrown into the middle of a plot that was under way.  Half the adventure was figuring out what was going on and the other half was stopping it.

2) Locations, and NPCs.  Each location of the adventure and each NPC in the adventure got a 4 bullet point write-up. This forced me to keep things simple and efficient and keep the adventure focused.  It also left room for improvisation which is important in these things.  Each note also referenced at least one other location or NPC, creating a web of activity.

3) Clues are the meat of a mystery.  I made sure that there were multiple ways to find a particular location or NPC, but only a few clues as to the specific situations.  This gave the PCs a mind map to work from - they know House Orzin was involved, but not exactly how until they talked to NPCs and poked connected events.  I tried to avoid "required clues" - and at no point did I need to feed or railroad the party - the players were awesome.

4) Red Herrings  ... I made none.  There were some ambiguous clues and the Players gathered some irrelevant information but, much like I expected, they created their own red herrings to follow.  I think in an RPG red herrings are a waste of time to prepare as they will crop up on their own.  Players tend to latch onto crazy ideas and run with them.  I let the players do this a few times but made sure the distraction was short lived - as adults we only have so much time to play games and spending an entire session investigating something that turns out to be useless would be a real bummer.

5) Timelines and Action were super important to keep things moving forward.  I had a timeline of what happened before "Day 0" when the party was directly involved and I had what the next 2 weeks would look like if the party did not get involved.  Of course they did get involved.  A great examples is that Fritz Oon was going to be the next victim.  But the party identified Fritz as an NPC to talk to earlier than that and warned him that there was some shit going down so Fritz beefed up security and wasn't killed.  The action keep the tension up and the party moving to resolve the issue without spending a "week resting" or any of that nonsense.  It worked out great.

This ended up being one of the most exhausing games I've run but also the most satisfying.  Thanks to my players for making this great!