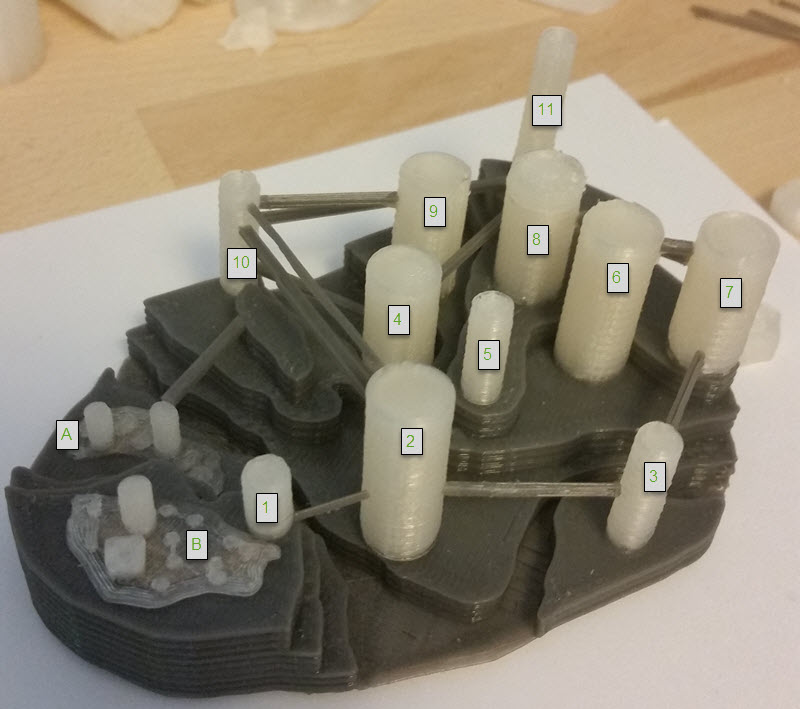 Playing with my 3D printer this weekend I created a very small scale model of the City of Aldsburg.  I'm still adding bridges and need to create a separate piece for the Tower of Steel.  Each of the towers is huge - a single level of the Lions Tooth, for example, could (and in some cases does) hold three distinct villages.

After finishing the bridges and adding the Tower of Steel I'll likely add some of the Wards (places between towers that people live) then do a bit of painting.

Next steps are to design better towers and bridges - add some details and print everything bigger - probably 2x with an eventual goal of doubling that scale as well.  I also need to get a better feel for the terrain - adding some variation, slopes, that sort of thing.

Chances are I'll create the model in a larger scale but do a print at this scale again (just shrinking it before printing).  Each level of the mountain is 5mm, the towers range from 10mm to 25mm.  So the Tower of Skulls is 47mm (2mm for the base, 20mm of terrain, 25mm for the tower) tall ... which is less than 2 inches. I made the models in Sketchup 2015, used Repetier for the slicing and printing software, and did it all on my Printrbot Simple (which I totally put together myself).

Reasons for the Print
The first reason is because it is FUCKING AWESOME!  Seriously.  I got a 3D printer from my wife and have been using it.  Because it is a 3D printer!  I'm still fascinated with the fact that now I effectively have a fabrication machine in my house.  Unbelievable.

The second reason is because I tried to map this on paper and it was a mess.  I want my players to get a feel for the scope and scale of this thing that I've been working on for ages and this seemed the best way to do it.  I'm pretty pleased with the way it came out and have learned more about my printer and design.

The Adventure
With numerous contacts burned and rumors discovered, the party is going to sneak into Juniper Tower to find a huge ruby that has been hidden there by thieve's unknown.  The ruby is rumored to be part of some ancient arcane artifact from the Tower of Steel.  Seeing as the Tower of Steel has been closed off for several months and, on a more worrisome note, the steel of the sttel tower has been "bleeding" into the surrounding landscape - rocks and grasses are taking on a hardened metaillic sheen.

After gathering as much information as possible, the party used a contact to get snuck into Juniper Tower.  Sigmund (the contact), a tall,wiry, one-armed fellow who had an unsavory look about him, but was vouched for.  With some bribe money in pocket, he smuggled the party into Juniper Tower ... of course things didn't work out quite as expected.

The party emerged from their crate and were at the bottom of a strange elevator.  Above them bars were crisscrossing the way out, blocking both adventurer and elevator from going back up.  Cursing Sigmund's name, the party began exploring, looking for the ruby, knowing full well they were in the Underworld.

Pushing through a chamber that appeared to be an old warehouse or storage area, overrun with vines, the party hacked through some vegitation only to be attacked by a tremendous worm covered in spines and insectoid plates.  Some deft combat maneuvers quickly took it out, and the party moved on.  Exploring the crates and the area they discovered more useless crap - rotted grains and mouldering silks.  It was, at that moment, one of the huge boar-creatures that they had been warned about came crashing through some doors and tore shit up.  A few moments later the party was stading knee-deep in demon-boar guts, Mynock chopping off the huge board head and Alois working claiming a bell-encrusted tusk.

Making note of a small chamber that was obviously once used for some sort of arcane ritual (binding? summoning?  it was tough to tell) the party moved on through a chamber where thick pinkish vines stretched like webs between floor, all, and ceiling.  Ignoring some other passages they deemed "Not interesting enough" they suddenly became aware that some small humaoids in the next area were watching their torchlight (thanks, Dwarf Low Light Vision!).

A wizard spell later (a black cloud obscured the humanoids line of sight) and a combination charge and sneak attack from the party laid waste the small creatures wielding make-shift weapons and strange  overly-complex and ineffective armor.

However, the damage was done and the party, now understanding they were not quite prepared for this, fled.  Also, because real-life time was short, time to roll on the "The Session is Over and You Didn't Escape the Dungeon Table".  The SODED table is hand for keeping things episodic.  I've seen some other tables like this and loved the idea.  I'll add that to another post.


Notes
Not to put too fine a point on it, this is not the best adventure I've ever run.  We perhaps had a bit too much to drink and were all a bit loud and excitable and my organization wasn't the smoothest.  However, in the end, some adventure happened, some experience was handed out, monster were battled, and dungeon explored.  I was a bit overconfident this round ... I'll take it as a lesson learned and do better moving forward.  Trying new things doesn't always work and I need to take that into consideration ... perhaps a more focused brain storming activity - getting an adventure generally planned and using player rumors to help define it more rather than flat out starting from scratch.

For the Aldsburg campaign I've added a new feature to character creation where the other players add some defintion to the characters.  When a character meets other characters for the first time, the players get to tell what they have heard about their new adventuring companion.

An Example from the most recent session
Tronheim is a Mage/thief of the Dusk lineage, totem the New Moon.

From these DTFs I add in some specific details.  In this case
1) He has a criminal contact in the that knows of his deed
2) The above was modified to be there is someone suspicious keeps following and talking to him
3) Trondheim's innate changability allows him, once per session, to permanently swap two skill scores.

There may have been some other things, but the above DTFs and results really set a tone for a fine new character.

How Many?
We were initially introducing new DTFs all around for all characters, but it got to be a bit much.  So now each character will have a max of 6 DTFs.  I'll add a spot to the character sheet to track them along with reputations, which are something I'm going to work on next.

Other Results
Other results from DTFs have included:
This has been mighty fun for giving players more to work with and encouraging the group dynamic.
Posted by Dale at 9:50 AM No comments: