WTF it is July already. And we have a holiday weekend here in the US. The weather in the northeast is awesome - if you like cold temperatures and rain, which I do.

Anyway, with the new Sorrow in Haven crew formed up, we have a new character map: 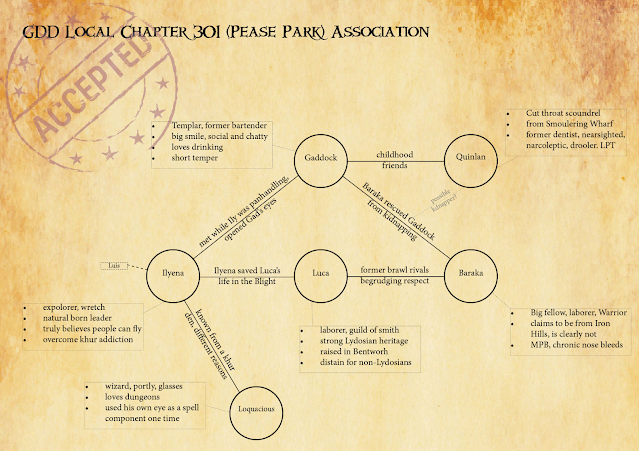 and I'm working on the "4-page" for another district - Pease Park. 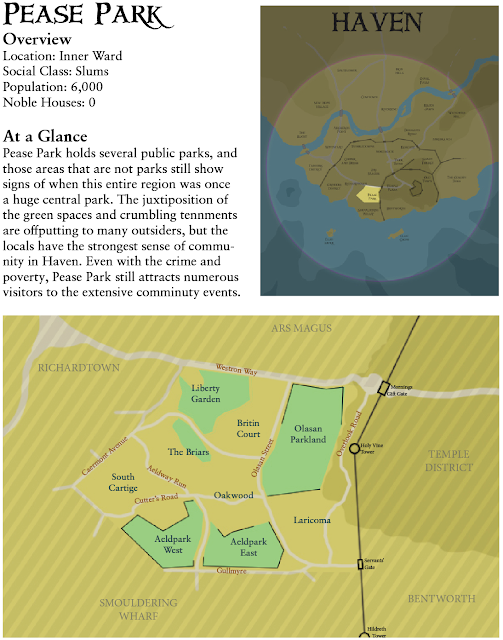 We also decided to try something with this set of characters which, I feel, is not going to work out well in the long run. I grabbed the Hackmaster 4e Quirks and Flaws tables. I let people roll on them. Rather than Build Points, they get a % bonus to their XP. Things went well for the most part, but one player's character just went completely haywire and down the shitter. I eventually had mercy on them and made them stop rolling on the tables.

If I do include a quirks & flaws mechanic in character creation, it'll have to be be seriously tweaked. Not just for the mechanical aspects (obviously) but to both imply additional role playing and make them feel more "Sorrow in Haven"-y. I don't want adventurers with multiple amputations. One eye is fine (and led to a great in-character story), but who cares about "drooling"? I know HM4e has a lot of parody content ... but it also was a beautiful re-designed version of AD&D.

I think for now I'll spend my effort on setting material.

Oh - and the first (unedited) version of the monster book is ready done. I have more material to write (a few tables here and there) and need to start tracking down some artists to fill it with creatures. But it is in a playable state! So that is pretty sweet.