With my players out of Dungeon Titanicus and now experiencing the Dreadful Wilderness, I've moved to a new chapter of the Dawn of Eradu game, and it isn't going quite as smoothly as I'd like.

The Game is great - the party encountered the Cornelius the Harvester, a corpulent sorcerer who lives in his cybernetic chariot that is the top of a WWII tank that fires a pulse of magical energy and the whole thing is mobile due to slaves carrying it around.  They ran afoul of the Royals, a gang of cannibal savages with Southie Boston accents and wearing beat up old imperial armor. There was some exploration and some combat - a lot of combat - and magical shenanigans.  In the end, Cornelius was killed, the Royals made temporary peace with the party, Mr. Creasy Silo lost a leg to an inter-planar rift, and Zigfried blew his arms off with unstable dynamite.

The issue I'm having, however, is the Point-Crawl.  I've always run my wilderness exploration as hex maps, but as an experiment I thought I'd go with point-crawl maps. It seemed to fit the style of the game better, but it is really difficult to switch gears.  The "which direction is it" conversation is getting old because no matter how many times I tell them it doesn't matter, they keep asking.  And their map looks like a technical diagram grid because they don't want to draw symbols because "I can't draw".

I'm just not feeling it. Somehow this is harder than a hex crawl or even a "normal" map. Maybe I don't have the feel for it or perhaps I'm not conveying the concept correctly. Maybe we are too focused on the map itself rather than the adventure?  Treating the wilderness like a giant dungeon?

The Regional Map
I'm not showing this one just yet.  It covers the regions or major regions the game takes place. From the mountains where the sun rises each morning to the sweet scented sea, there are plenty of regions to explore that are all connected up. Each region sets a tone with both terrain, danger, types of things encountered, and so on.  The Marsh of Mists is very different than the Rudworm foothills. 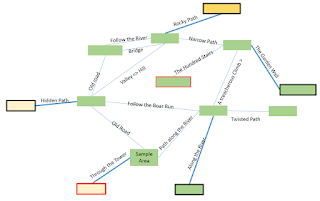 Each region has several areas - this is a map of one of the regions. There are the "day-to-day" travel points.  Players will know when they are no longer in the forest because there aren't trees, but they don't necessarily know they are in a new region.  Areas, however, are connected in specific ways (the old road, follow the river, etc.). The Area has a main feature that defines it and the players can explore more as they see fit. 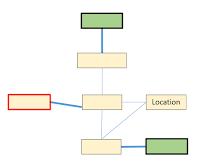 Location Maps
Each Area has several locations, most of which are entirely optional. This location map shows the locations of the sample area above.  Ignore the color coding ... I'm still working on that.

The locations are the fine detail of the point-crawl maps.  They are the "closed mine", "ruined tower", "weird rock that looks like a dong", or "gorgon lair". If players want to explore in more detail, there are options and things to make life interesting.


They aren't anywhere in particular - they are just "in there". If the party isn't poking around the Location, they aren't going to run into the specific sites and surely not the features.

Conclusion
As I've written this up I think I might be organizing too much. I'm doing what I used to do with eorld maps, which is "big picture then refine" but maybe I'm refining too much?  The Area Map is awesome and feels like a point crawl.  The Location and Site maps are after much fiddling to make them tight and look less organic.  Maybe that is the issue?  Maybe my remapping for things to make them tidy is translating to my players not getting the feel? I'm going to keep at it.
Posted by Dale at 9:57 AM No comments:

Gifts of the Dark Lords

There are plenty of Dark Lords and Chaos Godlings and Wyrd Thyngs from Between Space that characters can get involved with. Some of them grant boons.  Here are some random boons to get things started. One of my buddies asked for this for his game - I can't wait to hear how his players get themselves into trouble.

Badass Crowns
Roll 1d6 and wear your crown like you own it - because you do. Forever.