The Dungeon of Lost Coppers

Dyson Logos is a fantastic map maker (Dyson's Dodecahedron) and he recently put together a contest to finish up one of his maps.  I whipped up a 3-level map. 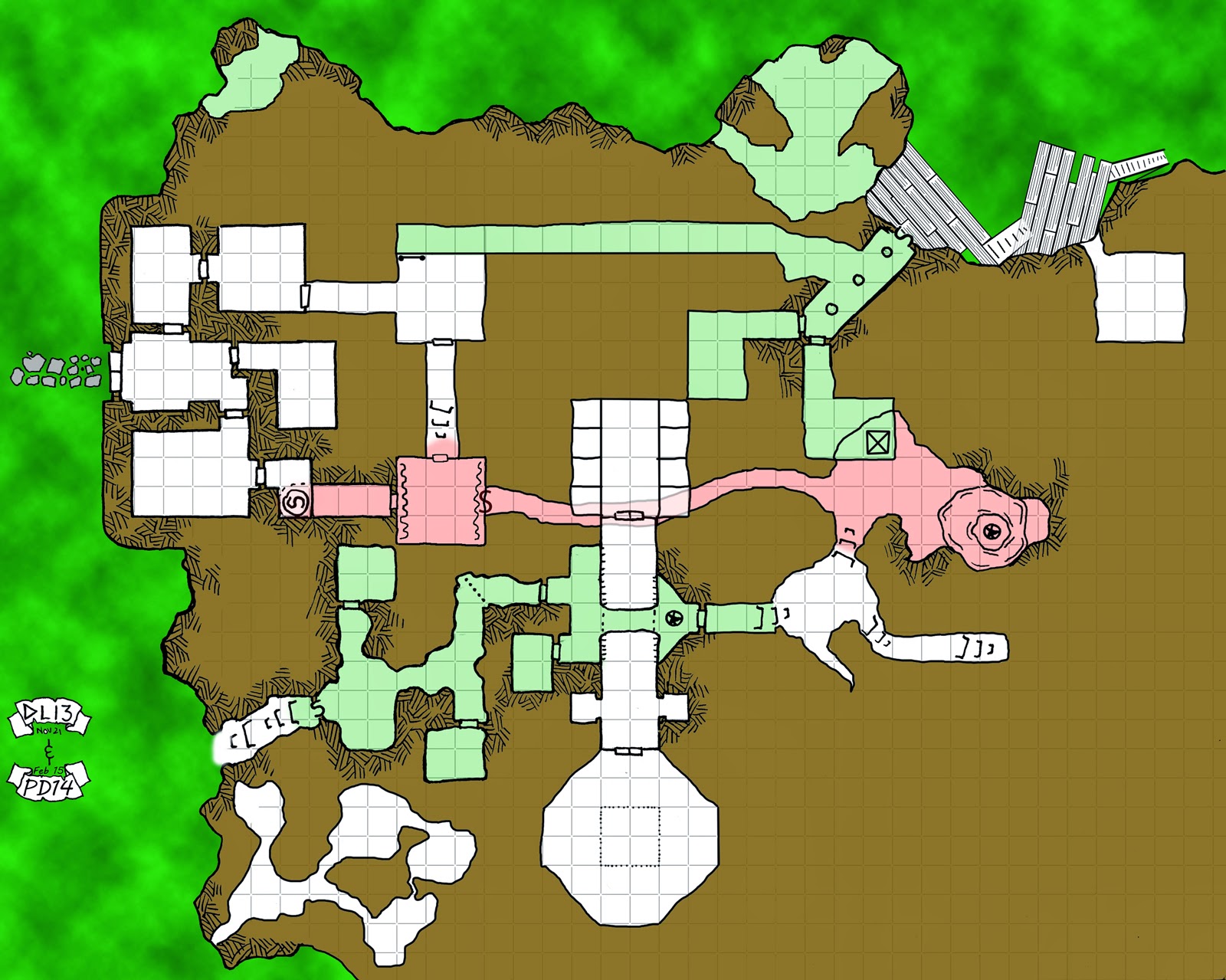 Southwest Caves: home to some gnarly slugmen that harass and generally cause problems for visitors to the dungeon.  They continue to be a problem because most adventurer types can't get into the entrace.

Northwest Aerie: A vulture infected with the Patchwork has grown huge and bloated.  it comes out only around dawn and dusk to hunt but the smell of the hollow thing, rotting from the inside, permeates the entire area.

Northeast Caves: Clever whitecap kobolds have set up an outpost to worship their strange mushroom god from on high.  They don't know about the secret entrance but are incredibly territorial.  Of course, they can be bartered and negotiated with because they'd prefer to let their fungal god do the fighting for them.

High Level, North: A long hall that opens into a gallery, ancient hall with intricately carved pillars that constantly shift uncomfortably, and a weak floor that will fall away into the lower level temple.

High Level, South:The western portion is the lair to a harpy of some sort that has a deal with the vulture.  The east has a bridge over the arena and a living statue that guards the door to the lower depths.  The grate across the central corner has long rusted shut.

Mid Level, West:  The lair of a young mind wizard that has a half dozen false men enthralled as slaves.  He collects various bits of lost culture and is creating a construct in the lower level that will seduce the unwary with promises of gold, sex, and extreme violence.

Mid Level, South: A strange structure that was once an arena.  The southern chamber is a large room with a fighting cage.  The north holds several cells, but there are no direct entrances to this location or ways to open the cells.  The northern walls of the corridor have ancient glyphs inlaid with long-ago looted metal and no longer function.

Mid Level, East: A grotto that leads to the temple and to unknown lower depths.

Lower Level: The mind wizard's construct is in the western chamber and the eastern cavers in a temple of sorts, more a shrine really, but definitely a place of dark worship for a two headed monkey god that appears to have spawned from Ktuth (in place of arms and a tail is has hashing barbed tentacles).


Summary
That was fun ... I think I might post up more maps moving forward.  Also, I entered the OSR Superstar Contest over at Tenkar's Tavern.  I'll post my magic item up after the contest.  Hey - anyone want to do some artwork for my magic items?
Posted by Dale at 9:40 AM 2 comments:

I love a good combat.  Fantasy adventures without combat can be fun (I've been told).  But laying waste to a host of goblin, swinging from ropes to fall upon your enemies from above (blades flashing and hammers mashing) is a damn exciting time.

Because combat has such a central role, it tends to get a lot of rules in the modern games.  Special powers, movement details, all sorts of things that help "enhance"the combat or make it more "realistic".  For the most part I say fuck that.  Tactical war games are fun - I like a 10,000 man battle set in the second Punic War as much as the next nerd (or space orkz firing malfunctioning wakkarokkits into the blithering idiots of the Imperial House of Wankeroo), but when it comes to role playing games, I don't want all those detailed rules.  They make for slower combat and turn it into a discussion of moving 5' or not.  I don't give a damn if you move 5'.


Want, Not Want
What I don't want are my players to get bogged down in what kind of combat posture they are in and exactly how far they can move.  What I do want are crazy ideas.  I want the player to stop sulking that he isn't good at combat (because his character isn't good at combat) and start doing things like throwing a grappling hook round that giant skeleton's legs and running in circles trying to trip the thing up (because that is awesome).

I don't want to have my players say "I attack with my sword ... again" and be bored because they think that is their only option.  I want them to declare they are going to climb up the dragon's leg and try to stab him in the throat.

How do I do this?  First thing, get rid of as many combat rules as possible.  Some need to stick around for the feel of things (like wearing no armor increases your initiative die), but others get to go (give ground and defensive stance).  If a player wants his character to slowly be backing away from an attacker, he should just say so and not get all bent out of shape about the rules that govern this type of activity.  Consequences should be determined in the moment!


Uh Oh
This last sentence is what seems to get quite a few people up in arms about things being fair and the GM having a power trip issue.  I'm GM because I wrote the adventure and I'm running things.  I have players because while they don't always like the outcome, they trust me and ... wait for it ... have fun.  Yes!  FUN!  I feel like so many people have forgotten that this whole thing is about fun.  Losing a character to a 10' pit can be fun (and often hilarious to the other players).  Failing miserably and having to retreat with 75% of the party dead and the main NPC being mobbed by enraged kobold can be fun - oh the stories to be told about that battle!  Winning is fun too, but it isn't winning or losing it actually is HOW YOU PLAY THE GAME.


To Sum Up
1) While we use the new Hackmaster, I still run an OSR game
2) Less Rules = more creativity = more fun
3) Winning isn't everything ... in fact it is usually the most boring thing
4) If you aren't having fun, you are doing it wrong
Posted by Dale at 3:19 PM No comments: