The Gigadungeon SORROW, namesake of Sorrow in Haven

The setting of Sorrow in Haven has several points of interest, but the one that I've enjoyed building the most are around the dungeons. In particular, the Sorrow of Sorrow in Haven is the first and largest mega-dungeon - nay giga-dungeon! - in the campaign.

How big? Smeesh. Fucking epic. Check this out: 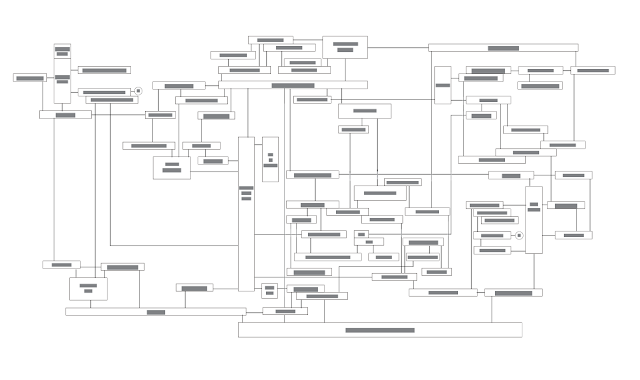 That is not the dungeon map, that is the "side view" level and region relational map.

Nay-sayer: BAH! what a big mess - no one will ever be able to explore all that! Garbage!
Me: NAY, Nay-sayer, it is you who are full of shit.

Each one of those boxes with the purposely blurred out names is a dungeon level (or sometimes a few levels). The levels are organized into regions. Each of the regions has enough material to be a mega-dungeon by most standards. In fact two of my mega-dungeons from days long past have been slotted into Sorrow. I know exactly how much play there is in there, and the answer is a fuck-ton (or fuqe-tonne if you prefer).

With that much mega-dungeoning, this is clearly a gig-dungeon. On another scale.

Nay-sayer: Seriously? How much of that do you even have mapped, let alone keyed? Garbage!
Me: TO HELL WITH YOU, Nay-sayer.

The entire dungeon is meant to interact, at least on local scales. Within Sorrow there are direct and indirect routes between places - the entire thing isn't on a flat plane, though, nor is that plane even euclidean. N-dimensional topology, anyone? If that doesn't float your boat ... magic portals, anyone?

To count this bad boy out, there are 11 regions. Within those regions are 81 levels. Some levels are only a few rooms.  One of them is more than 200. The median is around 35. I'd say this will be a 3000-room dungeon when all said and done.

How much of it is mapped? A little more than half is actually mapped, and anything mapped is keyed. Each level has notes and scribbles and partial maps. However, I plan to have map and keyed frameworks done by end of 2018. I'm going to re-draw every map using the same style (I've been compiling this fucker for nearly 15 years).

I've also lined things up so that I can run multiple campaigns in the same environment without having to worry about the parties stepping on each other; but their actions will still influence things other parties encounter.

Will it ever be done?  No, probably not.
Will I work on it constantly until I die? No to that either. I like going outside too, you know.

HOWEVER, I can't wait for the first party to get either brave or desperate enough to poke their head in. The first known level is called the Gauntlet. Below that is the Gear Hall. After that, it is a mystery; those that know either want these memories purged from their mind or are keeping those secrets for greed or potentially the betterment of all humanity.

I love fantasy role playing games. I really do.