The Party
Dirk Woodcock the magnificent warrior.
Dirk Pisspot a new smelly fellow with a dagger fetish.
The other Dirks were unavailable.

Dealing with Missing Players, New Players, and Continuity
New players joining mid-adventure is pretty easy (wave the GM wand and look - you found a companion through whatever plot device is most convenient).  When a player is unable to make a session, that complicates things because it makes things more difficult - do we not play, does some unlucky sucker have to run an unfamiliar character as an NPC, or what?  In some games, continuity is all important.  This, however, is NOT one of those games.

When a new character joins the party they will automatically sense that the other player characters are probable allies or at least should be trusted enough to adventure with ... for now.  Things can develop as they do as the game progresses.  No bullshit 45 minutes of sniffing butts and introduction by way of role playing.  Let's get on with it!  The fun stuff happens in the game anyway.

When a player is not available, their character fades away into a slack-jawed grey transparent shade that floats around following the active player characters.  Everyone forgets about them almost instantly.  When the player returns to the game, poof - they are back in the action.  This is some heavy handed shit, but think about it - this is a game of dungeon crawling and weirdness and it fixes the annoying 30 minutes of explaining where the character has been and what they missed and so on.


Adventure Highlights
Summary
That was hella fun.  Adam lost his pregen but declared it a "good death".  I may have to cancel next week because of work, but am going to try.  Also, the real life Hack is back on AND we've started playing Necromunda.  Game life is Gee Double Oh Good.
Posted by Dale at 7:01 PM No comments:

Lore of the Halls

A skill that is universal among adventurers, but not other folks.  Those with dungeon lore (untrained or otherwise) can feel the underworld around them and have some intrinsic knowledge of it.  The knowledge often seems to appear from thin air - almost as though a collective consciousness is at work.  Dungeon Lore is similar in some ways to Monster Lore (but does not replace it) and is often used as the equivalent of an Underworld Survival skill.  More than anything, though, dungeon lore gives insight into the madness of the underworld, the dungeon, and the Perilous halls of Sorrow.  As one increases in mastery level rumor has it that the character becomes less human and more Hollow.

Description
These segmented monstrosities slither the halls and tunnels of the underworld leaving a thick mucus behind them.  They are most often grey or
brown and range in size from 3 to 12 feet in length.  The tunnel worm gives off a scent similar to that of sour milk.


Monster Lore
The slime of these creatures is known as "worms' milk" and thought to have many curative properties when drunk or applied to open wounds.  There are underworld cults that worship the worm and protect them with their savage spears and odd traps - the cults drinking copious amounts of the milk to attain visions of the true nature of the Great Worm from which all tunnels worms were born and who lives in the lowest depths, praise unto Her and her Yellow King.

The tunnel worm is believed to primarily feed on fungus and carrion, although they have been known to deliver a rather nasty bite to anyone foolish enough to poke at them.


Sightings & Encounters
At this point there have been no confirmed sightings, although several rumors and stories can surely be found.  Dirk Woodcock, an underworld game-hunter and adventurer is the leading expert on the Tunnel Worm and uses for the "milk".

The Opening
The Brotherhood of the Dirk had been traveling on that road for what seemed like eternity.  As they left the Plain of Broken Stone they made their way to the village of Cherryvale known, at least according to Dirk Lovejoy (the socially adept and rakish rake of the group) they valued family above all else.  As they approached the gate they could see the smouldering remains of a field and farm in the distance.

The gates were readily opened and the lie about coming to visit their aunt was quickly dismissed as the townsfolk seemed both wary and excited that adventurers had arrived.  Each of the Dirks could feel the presence of a dungeon nearby - their bones ached and seemed to cry out for it.  Now they just needed a little direction.

Father Chayne approached the group and, offering his guidance as the local moral authority and priestly figure, asked them to investigate some unfortunate happening.  ... and so it began ...


The Party
While pregens were provided, the players picked their names.  The party was as follows:

Dirk Woodock - a fighter with a two handed sword, knowledge of monsters, and strong command of language
Dirk Lovejoy - a fighter/thief who was a smooth and snarky and was the only one who actually equipped himself for the dungeon
Dirk Humblejunk - a cleric of the Eternal Lantern who really really likes the ladies

With all three characters named Dirk, the tone for the game was set.  A little ridiculous hilarity would definitely help once things in the dungeon got nasty.  Also, playing online, you just need to go with the flow :)

Thoughts About Running Online
Damn that is tough.  In real life when everyone talks at once the GM can just wave their hand and get on with the game; online less so.  Also, I notice I tend to use my hands and lots of body language while GMing - and that doesn't translate as well over Hangouts.  Lastly, I think I need to take advantage of the technology a bit more ... pictures and such ... I'll look into that.  Any advice folks have I'm happy to listen to.  Overall, though, it was a fun game.
Posted by Dale at 7:12 AM No comments:

Cherryvale gets along as best it can.  The village walls are a strong grey bricks hauled from the Plain of Broken Stones and, as legend has it, magically sealed together by Father Chains (said to be an unknowing aspect of the Phoenix Lords).  Not many come through here, but from time to time adventurers wander in along the northern road - usually a bit confused and more often than not telling outrageous lies about from whence they came.

Recently, though, people are frightened.  Something is prowling in the night and scratching at the walls.  Something is sniffing around windows and stealing from sheds.  There are fewer dogs than before and several of the farmers have missing livestock.  Farmer Tinson was drinking in the Bishop's Finger last night and said he saw minions of the Devil cavorting in his field and doing unspeakable things to someone.  Jenny Barlow is missing.

While the sun is bright and high in the sky those few braver souls went out searching and followed some strange markings on the ground.  There in the grove of spade-leafed katsura trees they found tangled in vines and crawling with insects an old shrine to a god best forgotten.

They counted the eight sides and knew that is was once dedicated to the demon lord Balshamroth.  From the shadows came a low grunt and a moment later poor Rudwin was lying on his back - a crimson fountain erupting from his neck.    Del and Jasper turned and ran.  Del heard Jasper scream and fall but didn't look back.  Jasper was pleading for mercy and then pleaded no more.

Del hasn't been out of his house for days now.  His shutters are bolted and nails can be seen sticking out of his door frame.  The Yelwart farm can be seen still smouldering this morning - last night it lit the entire eastern sky as field and barn were turned to ash.


Clark has been saying that something is tunneling under his floor.  He can smell it - like sour milk.

Cherryvale gets along as best it can.  This week is worse than most, but they've seen worse.  The youngest daughter of Blacksmith Ulrich was given to the north road - always an honor to give ones self for the good of the village.  Perhaps her sacrifice will bring the help needed. 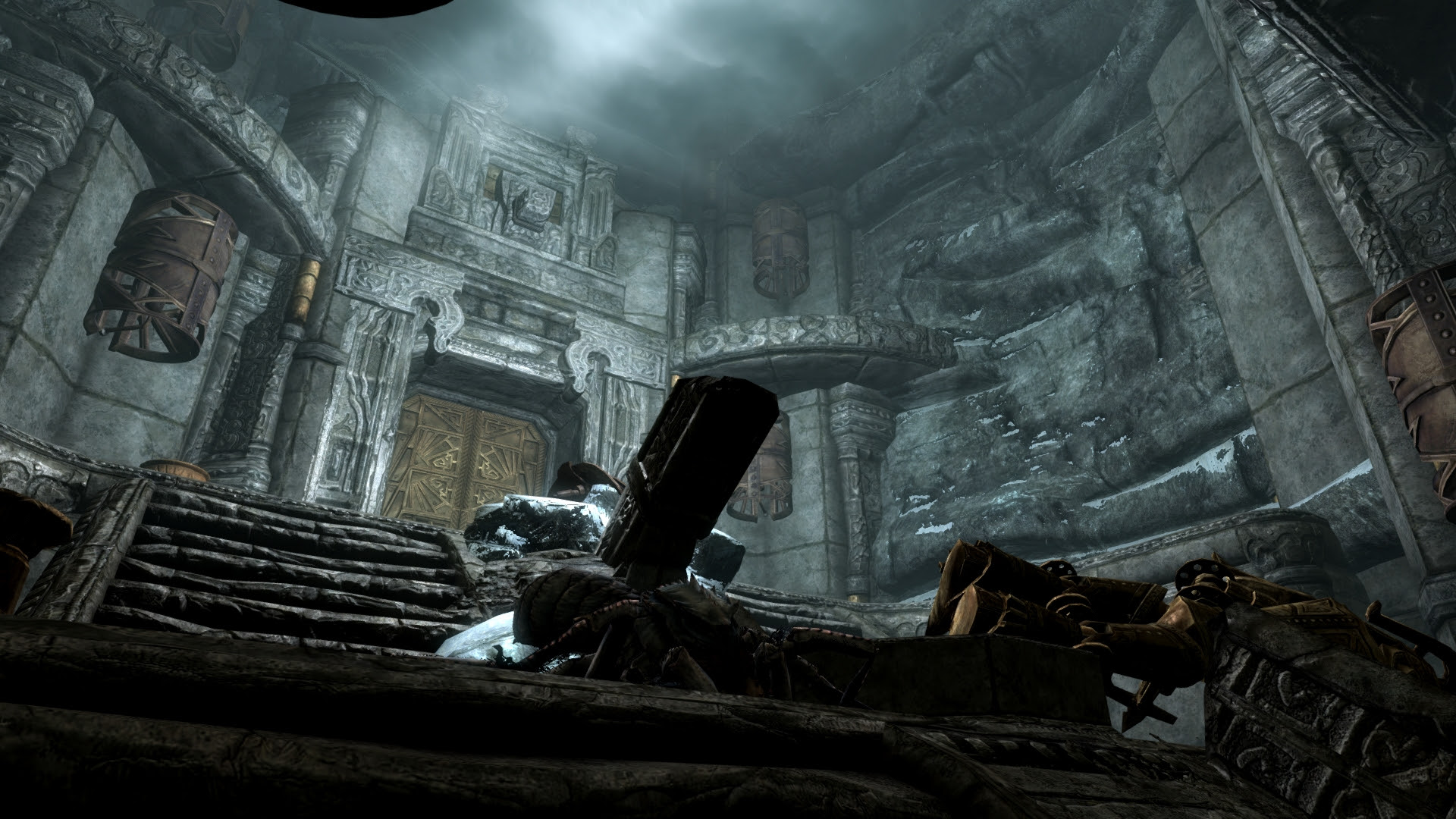 A while ago I posted about cinematic combat.  It is very eay to make the new Hackmaster game have an action adventure feel rather than a tactical wargame feel - at least in real life.

I'm considering running test levels of the Perilous Halls of Sorrow Megadungeon as an online game (probably via some sort of google hangout type business) and have been thinking about how to make the HM combat move faster rather than count each second.

Combat for an online tabletop game needs to be pretty focused or it can take far too long - and long combat is boring and bored players leave or get weird.  And not fun weird, weird like derailing the game just to make something interesting happen.

Changing Mindsets
The first few times I thought about how to streamline the tactical combat, I was removing tactical options.  What this ended up doing was still having a tactical game, just a simpler one.  What I wanted (and what I've talked about previously) was having a more cinematic combat style.  This all comes down to descriptions, judgement calls, and NOT having a battle map.

As soon as a combat map shows up, there are tactical discussions.  Sometimes this is important but other times it is going to bog folks down with too many choices.  If I keep the combat descriptions to descriptions and let the combat develop it will free the players from worrying about "which square" they are on and allow them to declare things "I charge at those orc scum!"  For that matter, stripping out a lot of the tactical rules (like for charging) would simplify things as well.

But wait ... if all (or at least some) of the tactical rules stay in play BEHIND THE GM SCREEN it frees up players to play an action adventure and let the GM determine when a rule is useful or not.I know some folks will grumble about the GM only using rules to his advantage and other such nonsense, but seriously - if you are playing with a good GM they know when to make a judgement call and when not to and that killing your players with obscure rules makes your players grouchy and eventually gone.

What I'm Going to Do
1) I'm only going to give the option for tactical maps when they are absolutely necessary and, more importantly, sketch them out.  They aren't going to be constantly updated with position, but rather quick sketches to show generally what is going on.

2) I'm going to announce the count quickly, players should be tracking their own stuff.  Actions are going to take "a few seconds" or "a long time" rather than a specific number of counts - the character can abandon that activity and do something else or wait it out until the actual count of completion is declared by me.

3) Moving is going to be descriptive and not done on a count by count.  It will take "a few seconds" to get over there.  Attacks will be delayed, and so on.

4) Tactical considerations will be made as a judgement call based on activity and player description, consistent, and generally kept behind the scenes.

5) The dice I think I'm just going to ask people to roll and trust them.  At least until i find or make on online dice roller or somesuch that has the HM dice (penetrating) built in.

6) Remember to have good Megadungeon fun.