I draw a bunch. It seemed like fun but I'm not really into it. Perhaps I'll make some more later? If I do more, I need to change the grid size so I can add them staggered. Or maybe I should figure out what the 'standard' scale is so you can mix and match with other folks' stuff. We shall see.

Here are some scans. Perhaps I'll make them into individual images suitable for roll20. 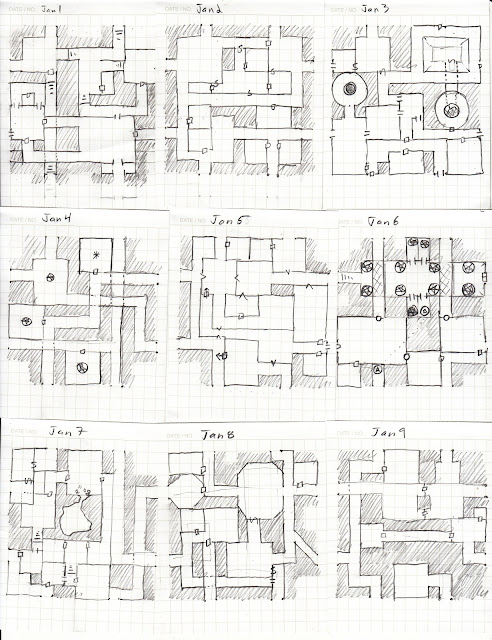 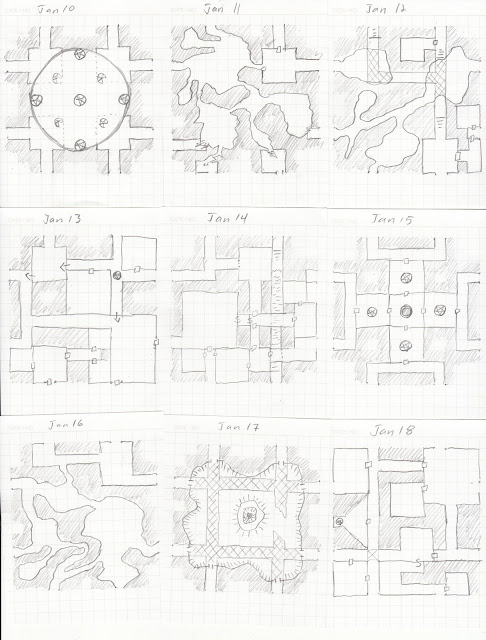 The city of Haven is absurdly large. The population density is unreasonable. The idea is ludicrous. However, I'm not going for reality, I'm going for insane fun and maximum opportunity.

Haven is broken down into Districts, each acting like a semi-autonomous city-state within the city. There isn't a central "city government" - the place is endless chaos of guild and noble house politics and schemes. Recently in my game the criminal element was a major focus. There was a gang war in the city the adventuring crew organized to take down someone nasty. It was awesome.

This post is about one district: Shady Thicket. I decided to write up a document for each district to give them distinct flavor and color. Here are some screen shots of that. Let me know if you are interested and I'll happily share the pdf with you. 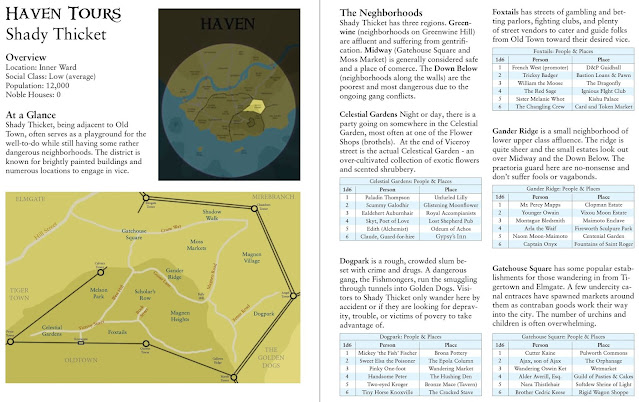 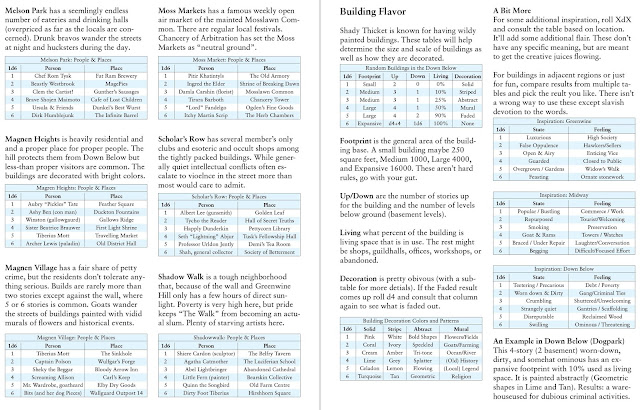 The idea is to give each neighborhood within a district some tone, which gives the entire district a tone. In addition to the description, some people and places. A series of tables to generate random buildings that apply to everywhere in the district and lean into the feel of the neighborhoods in the three regions of the district.
The people and place tables will always be unique, but as I write up more districts - which I'll do in detail as we actually play in them - I can reuse and tweak the building generators. For example, in Smoldering Wharf  docks I may use something like.


In fact I'll use exactly that. :)
Mapping
You can map a city, but as soon as you've done that you lock things into position. Also, it is boring. I've got a 2-page spread of the district with the walls and major roads (and Greenwine hill). I've drawn on significant sub-streets and added a few buildings to mark specific locations. Everything else is handled with role playing and random tables. Based on an idea from the lastgaspgrimoire (which has SO MUCH GOOD STUFF), I've written up my "city crawl" mechanics to cover chasing someone down an alley, seeing wtf is going on up on those rooftops when the crew inevitably does that, and poking around the Undercity. So the map is simple and we add to it as we need. As we transition to roll20, I can even share it with the players. 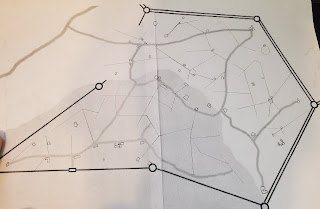 I've complained about it before and made a bunch of tables and all sorts of things, but weather tables in RPGs are rough. Too complicated, not an interesting flow of weather, too random, and so on. Even the ideas I came up with were OK (at best - and I'm biased) ... but not really interesting or even that easy to use. Then I discovered this absolute gem!

Of course I had to abscond with the idea and make some changes to fit my needs. It really is a beautiful system and quite flexible. It is dynamic, gives patterns to recognize, and is really simple to set up!

How To Use these Tables

Special Hexes
Then I decided that I could do some sort of special hexes. The top-most and bottom-most hexes are special in that they tend to stick around for a bit. So in the spring the first time one of the top or bottom hexes are encountered they are Spiced Winds. As soon as the weather leaves that hex, they change to Doldrums and the other once becomes Spiced Winds. The winds can stick around for a few days, but don't come about too often. Cool!
What My Weather Types Mean
And now for some tables:


In Action!
My calendar has 12 months, each with 28 days (because fuck it - why make it complicated like real life?). Spring is March - May, 3 months per season. Starting on May 7th in the center spring hex, here is an example of the daily weather.


Additional Thoughts
This simple idea is so rad - it could be used to chart the course of anything dynamic. What about how the forces in a war are doing, or the relationships between factions, or the unrest in a nation? All of these are possible. It really may be one of the best things I've found on the internet.
Posted by Dale at 11:49 AM 4 comments:

Everyone loves a monster book! More monsters! More ideas! But you know what no one likes? The same fucking monsters over and over and over. How many monster books have zombies and ghouls and whatever is in the SRD of whatever game is popular right now? Oh - and let's not forget about the wolf, the dire wolf, the ice wolf, the fire wolf, the undead wolf, the water wolf, and myriad variations on the same thing that are only exciting once or twice (think reskinning monsters in video games).

I'm in the writing details of the first Phantasmagorican - the monster books for Sorrow in Haven. This is the general layout (please ignore typos I'm not into editing right now). The blank space is for yet-to-be-determine stuff. Some artwork definitely, but perhaps also random tables to spice things up. For example everyone knows what the cherub looks like and the sticks to that general image, so perhaps a table of "what are they guarding" or "variations of weapons and look". Some might just get some additonal text describing tactics or variants or something. I'm focused on getting the main guts all done before going down the rabbit hole that is details. 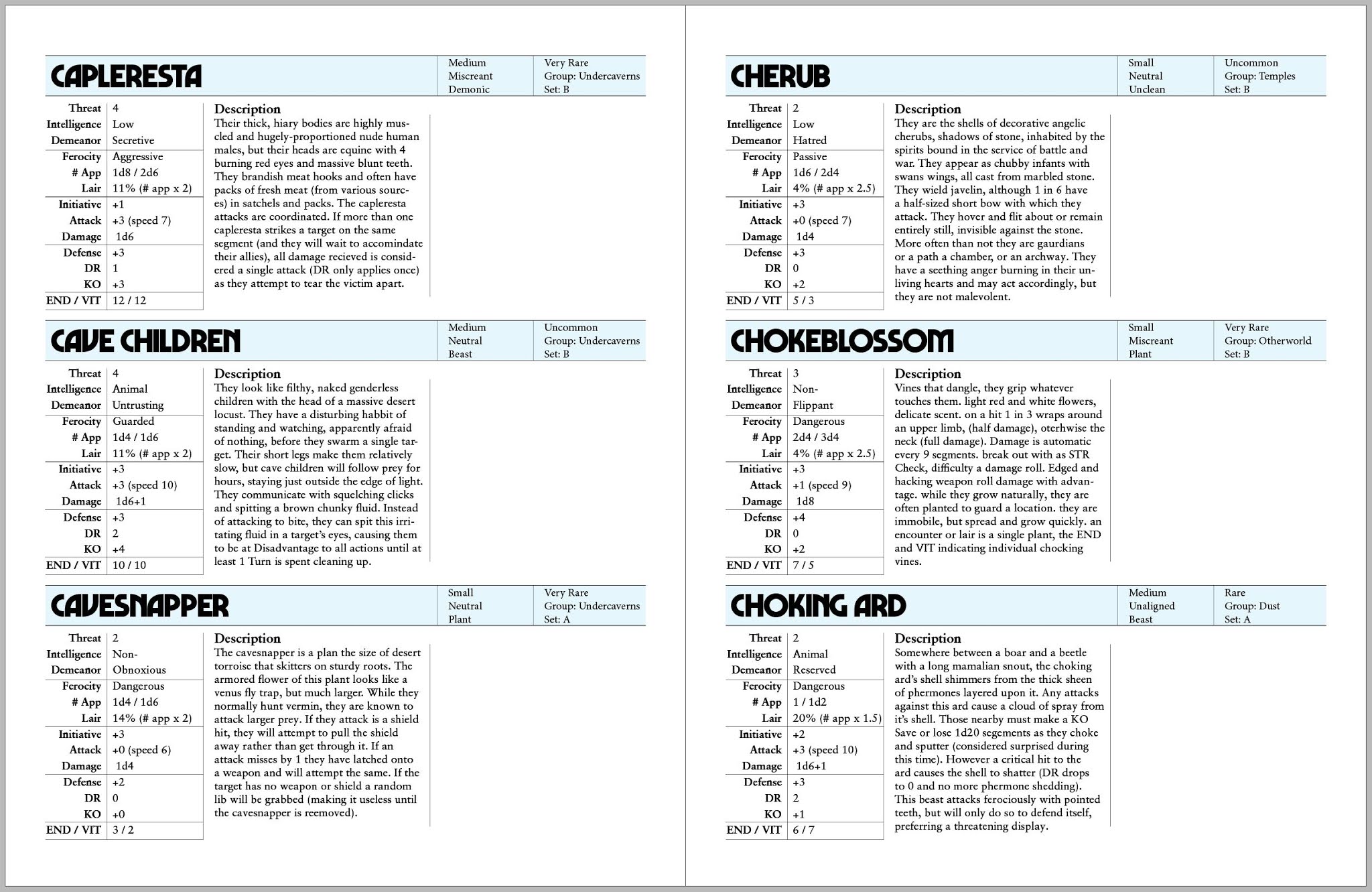 Once I've got everything written up, I'm going to go back through and clean up the langue. Get rid of "seems to be" or "may be" and things like that. Make the words definite. Replace dumb words (big) with interesting words (towering) - generally make the short blurb evocative. If a GM reads a description and doesn't immediately imagine the thing and where they could use it, it isn't a good description.

The Sorrow in Haven rules are all done - we are just doing some playtesting at the moment. At this point rules tweaks are very minor, a few wording choices get updated from time to time. Ultimately I'd like to make the whole thing less wordy (I do tend to go on) but I'd rather have a product in hand than backpedal that much.

I really hate adventurers exploring a dungeon, then leaving, then coming back and nothing has changed. Obviously things have changed, but rarely are there any rules for what has happened.  Here are the rules that I use.

Monsters
If there is a lair nearby (and nearby is relative) expand that lair and move some of the monsters. Only add more if they would be spread too thin. If the lair is of something with just 1 monster, then add some minions of that nasty.

If there are nearby monsters that aren't from a lair, add a few more of those. If there is a faction that has a reasonable presence, add some of them. These two are interchangeable and just depend on the map and the dungeon and all that.

Finally if there isn't anything that jumps out at you, add a random monster. Shit moves into dungeons. They spawn monsters from their very walls. Whatever works for you here.

Treasure
If these are new monsters, add some new treasure. Otherwise split up some other treasure from where the monsters came from. If it is a trap room them move something from a nearby cache that the dungeon mooks would reasonably hide and trap.

If unguarded, add something new. I always look at this last one as something another adventurer may have dropped.

Special Events
If there are some sort of things going on add a special bit to the dungeon. For example, if there are cultists trying to summon a demon then add some evidence of summoning, maybe some imps that have joined in the fun, or perhaps they've tweaked up this location to aid in their summoning making the whole thing move along faster ... or maybe they have SUCCEEDED and the thing is here. Whatever happens, make this room special and interesting (hence special event).

Been Gone a While
In the case where characters fuck off and do something else for a while, or get otherwise engaged/stuck/in jail/healing/leveling up I usually roll a few times or lower the die. Sometimes I just organically decide what happens.
They killed most of faction 1 but faction 2 is still ok? Well fuck you faction 1 - faction 2 is here to take this dungeon over! Now that the Cult of Summoning Satan is dead the Sisterhood of Ruined Flesh is going to make this whole place a temple to Rot.
Big monster is killed off? That seems to open a new path of exploration for the other denizens. With that stupid gorgon eliminated (no one liked her anyway) the Callowpest have moved in from the north and started hunting a Sick Jack tribe. The Jacks don't like that are are setting traps.
Last Words
It is 2021. Finally. FIrst printing of Sorrow in Haven (revised edition) should become a physical thing this year. Monster book(s) are on their way - lots of writing and layout still to do - I am struggling a bit to make a layout I like. GM handbook is in its infancy. Also working on layout (focused on usability) of Sorrow itself.
I'm also working on some geomorphs - a little daily exercise. If that actually becomes something I'll see about making them into a pdf or something. Most of the "365 day" projects don't make it a month (forget about a year), so who knows?
Posted by Dale at 5:18 PM No comments: