Paranoia is the Best RPG of All Time better than D&D I said it.

One of my personal favorite games is being rebooted (again) ... PARANOIA LIVES! 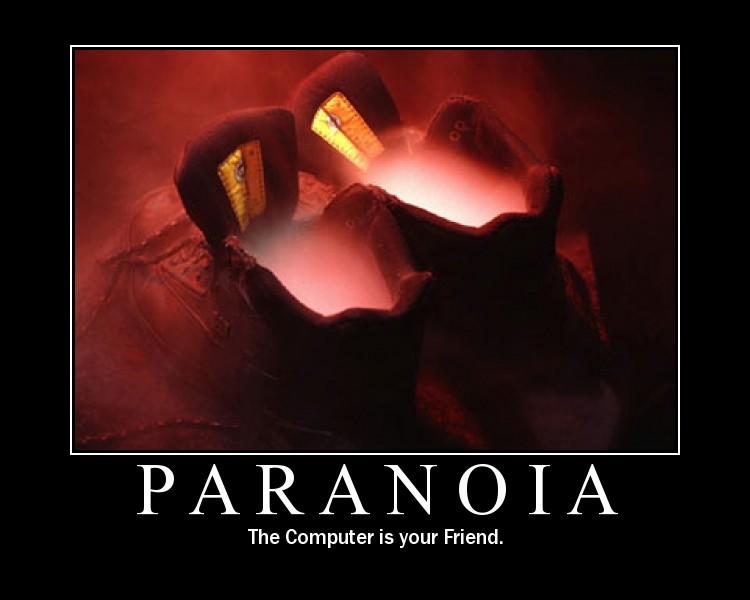 I'm involved in this: https:  Tenkar's Landing Crowdsourced Sandbox Setting.  I'm quite excited as there is some good energy so far.  Also, Tenkar's blog is top notch if you don't already follow it.

I'll admit that first I barely pay attention to the whole OSR argument.  The internet is full of people that like to argue and fight and mistake their opinions for thoughts.  The fact that a community came into being about playing awesome games and then some folks are pissing and moaning that it is being "Taken Over" and talking trash and generally being jerks makes me sad.

OSR is whatever you want it to be.  I run a HackMaster 5e game and while the rule set is definitely not "old school" the way we play is.  Therefore I run an OSR game.  Do you disagree with me?  I don't care.  At all.

Everyone can just do whatever they want and play however they want and argue whatever they want.  In the end, I'm going to continue to run my game the way I like and the way my players like.  I honestly don't give a flying fig about what qualifies as OSR gaming.  What I do care about is that people are making tons of cool stuff and letting their creativity and imagination drive the fun.

If you want to define OSR go for it but be aware that you are probably limiting yourself.

...wherein the plague comes to Aldsburg and the party becomes terribly lost in the Undercity...

What About Session A2?
Good question - I didn't get around to writing about it because it wasn't a great session.  I was hung over and and ran a mediocre (at best) game.  The adventurers were hired (by default of debt) to deliver a package.  After dealing with a seedy den of drugs and corruption they took the package which they eventually determined was the boxed head of Albonia to the Steel Tower (where wizards dwell).  She begged and pleaded but they left her there for whatever nefarious purposes were at hand.  Not much in the way ad adventure, but it set a really dark tone.  Seriously Dark.  Also, the adventurers got outside of Lions Tooth Tower, which was a treat.


Playing Not Running
The idea of the Aldsburg Campaign was to be able to hand off the GM seat from time to time.  B ran his first session for us and it was a grinder.  It was definitely fun to play and I didn't overrun everyone else, which I was through conscious effort.  I've mentioned this before - switching sides of the screen can be tough and I'm not the best at it.  However, with a little self awareness I think it worked out great.

New Blood
A new character (mine) arrived in town: Dirk the Halfling fighter, former gladiatorial slave and paranoid liar.  Through a series of unfortunate/awesome events he killed one of his guard captors and hid in his corpse only to escape later before the gnarly funerary rites started.  Fleeing for his life, Dirk ended up in the Iron Streets of Lions Tooth Tower with his cousin Cheyanne.  Her work at the Orphanarium got Dirk in contact with Mirk who introduced him to the party.  In the mean time, Dirk is a beholden to the Red Shields (a local gang) who are protecting him from the slavers who are looking for him (he only escaped via murder 3 weeks ago).  The Red Shields have contracted him to assassinate Franky One Eye, a fence for the Magnolia Street Runners.

The Setup
There have been more and more people gone missing.  Far more than usual.  Especially Halfling.  Trudy, a friend of Dirk's cousin Cheyanne bursts into the Murder of Crows tavern and tells Dirk she has been missing for days.  Dirk didn't know this because he has been trying to keep clear of her to avoid troubles.

The gang - Fredrick the warrior, Boreas a Winter Mage, and Alois a cleric of the Unfettered Raven, make their way to Cheyanne's house.  Of course, along the way, they notice that more folks are sick.  People look tired and have huge black bags under their eyes.  Then the bell starts ringing and the sound og the great gate being closed is heard echoing through the warren.  "THE PLAGUE!  THE ORCS HAVE BROUGHT THE PLAAGUE!" is being shouted from the rooftops.

Of course the only evidence of orcs were brought back in session A1 in the form of an orc head.  And now having a bit of fame and recognition in the streets, jerks are pointing as us and blaming the party.  Fools.

Highlights
After a search of Cheyanne's house we found some clues that lead us to a grate that opened to the Undercity.  Uhg.  Luckily at the same time we also eyeballed a Red Shield that I knew named Timothy.  He was strutting so I said hi, bought some drinks at the Green Dragon, and got a bit of info from him.  Apparently, he said, there is a cure.  I was suspicious for sure.

Back with the gang we went looking for Cheyanne down in the sewers.  Nasty stuff.  Punched an old sewer dwelling man in nuts and got info on where to go.  Right, left, right, hop some sewage, and eventually we came to a rough hewn passage.  Great.  After avoiding some traps (which let us know we were on the right path), we fought these horrid underworld beasts - giant long-tailed ratrabbits.  Dirk now has a fine collection of fuzzy tails.

More exploration and eventually we head even farther down.  No idea where we are, but that orc got his ass kicked when he attacked.  Then we ended up fighting some huge rotlord cleric bastard orc while we were on boats crossing some sort of resevoir.  While he escaped after wizarding us we cleaned up the plague dumping ground.  Unholy altar smashed, loot gathered, and off and found some more terrible stuff.  A note from the Red Shields and someone named Hemlock.  This is all bad.  Cheyanne is lost, but at least the plague is done for.


Thoughts Running A Shared World
Giving up the GM chair is tough enough, but running a shared world is complicated.  Figuring out how to not step on each other's toes for when we lay out threads for future adventures is going to be a challenge, especially without knowing what the other GMs are up to (and we don't want to know - that makes it fun).  Future adventures are going to include some more dungeon crawling and at least some level of gang warfare.  Hell of a thing we've got going here.  I hope it continues to be great for everyone.