The monster book got lost in the shuffle of the new year, but I'm back on my bullshit! Focused on writing and tweaking stats as I go. I changed the number of monsters in lair to an actual roll instead of a multiplier, and have been adjusting some combat stats based on threat and description. Just finished page 25 - only 16 pages to go. Then art and/or the extra fun tables.

Always with the art. The art defines the look and feel, sometimes more than the text. The stat blocks are mechanical, the description have some flavor, but pull double duty as mechanical details. That leaves the art and tables. These need to be entirely inspirational to have the desired effect. 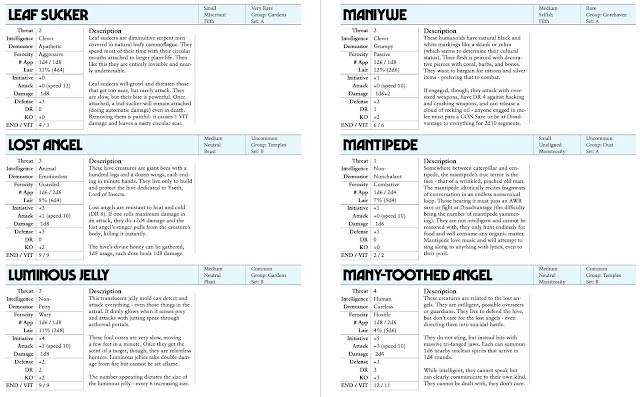 My most recent artist has gone and gotten himself a regular job. I'm quite happy for him, but this means I need to find some new folks. I've got this idea in my head where these aren't detailed drawings, but images and impressions. Like an adventurer quickly sketched something in their notebook. I love what Scrap Princess does - evocative and strange and, most importantly inspirational (and the non-art material is also INCREDIBLE).

Then I got to thinking, what if I describe a general style (quick and sketchy, backgrounds optional, infer rather than show) and find 5 or 6 artists who want to throw down. I also know that everyone has their own style and asking them to "dress down" is generally not cool - all the art an artists produces is their resume and asking them to do what might be considered 'bad work' would be detrimental. So why not ask Scrap Princess? Frankly, though, I'd be embarrassed to ask Scrap about commission work. Their stuff is so amazing and I'm just a hobbyist doing a vanity project.

But back to it .. the question is which ones get art and which ones get tables? I definitely want at least 1 illustration each page ... or spread? Maybe a few artworks in there can be full-page illustrations of a critter or critters on the opposite page. I don't know yet. First things first, though, I need to find some artists to discuss this with.

The first thing that comes to mind is The Hive - so let's do that!

Add in some world building with the monsters? Sounds like a good plan. I have no idea who Yseth is - that isn't a cannon old world god in my game (yet). And from that last one I wrote she apparently wants to be reborn. The Lost Angels have honored dead - their own? Are they associated indirectly with the Church of Eternal Light (a thing in my game) or connected to the Shadow Templar (also a bad guy thin in my game)? More questions than answers? I'd say that is about perfect!