I'm going to write us session reports for each of the games I'm running.  I've got groups planned so far and a third category I'll get to when I get to it.

T: Tabletop - this is my face-to-face group that meets every other week (or so).
O: Online - I have a few friends who live far away, so a little Skype gaming will be thrown down.
P: Pickup - eventually I'll want to run this at conventions and game shops, but no plans for that just yet.

Mini Tabletop Session Report
We finished the first adventures of the 5e Planescape game - it was pretty awesome.  J brought in some LotFP stuff from his copy of Slugs.  I was jealous because I didn't get one ... but as usual Raggi's insanity brought the awesome.  Some fucked up slug mist nearly TPK'd us!  However, this isn't about 5e, it is about the first Dawn of Eradu session!  We finished the 5e game early and ran about an hour to get the tone going.

Character Creation
Everyone generated 6 random 3d6 stats. If the highest was less than 16, the lowest score became a 16. Then they placed them where they want.  We rolled for random weapons and some random gear.   Interesting details from that:

The fun part here is that no characters have any memories. None. No character class, no tedious background story, just some weird gear and the here and now. A previous post talks
about the mechanics for recovering memories, but there is more to it than a clever setting mechanic.

GM Design Notes: I really want to see if I can get players to play within a framework of rules but not get caught up in the numbers and abilities and archetypes of class. But I also don't want a completely free-form storytelling "game".  So to move things along at an accelerated pace, characters with nothing but some stats and some gear.  Players need to breath life into characters through their actions. No arguments about if a "Lawful Good Ranger" should be using Fekulon's Orb of Fire to lay waste to a village.  If that happens, it happens.  Consequences from actions, not restrictions from labels.  In less than an hour, however, the combination of Dungeon World Mechanics and a strange freedom from their "role" in the party got the group role playing smoothly.

GM: What is the thing that you regret most in life, the thing that defines who you are today?
Proximo: I failed to win the Gladiatorial Games ... the honor was not mine.

GM Thoughts: As soon as the first memory came into play I realized that I needed to get a big list of questions ready for folks.  I also realized that I made the rules for recovering memories a bit too easy, so they are in rewrite. 6- now gets the character a Nightmare, which if they "deal with it" through role playing they can mark it off with XP.  It is like a bond with the character's former self.  Also I suddenly realized I could direct the kind of characters I want to have in the campaign. While there is no obvious back story, there is one I'm not telling, but as the memories form some things will possibly become more clear(?).  Alternatively Players are answering questions, so who knows where it will go!

The session ended there, and I introduced how I'm bringing Bond into play.  At the end of a session you can write a bond for a character that you interacted with this session.  Make it reasonable and applicable.  We stumbled a bit here, but got some good ones.


Summary
It was a fun session.  I immediately expanded the starting gear tables significantly and got around to create the character sheet I want these folks to have.  It isn't a playbook in the DW sense because it lacks moves.  Also, it has some things that aren't part of standard DW. I'll explain these house rules in future posts once the players figure them out. I can already guess that DW standard bearers might freak out about the second line of debilities, but I suspect it fits my game style better than it reads.  Of course I could be wrong ... in which case I'll fix it.  GM's gotta play too, yo! 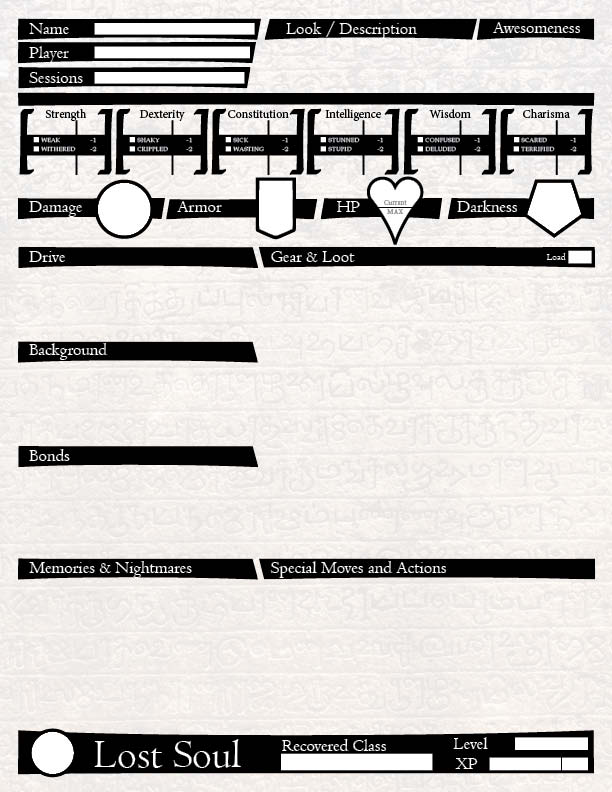